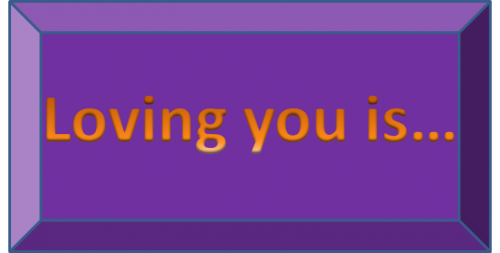 As a girl, I wondered why some couples seemed so happy while others seemed to be sort of stressed out. As a casual observer, it never occurred to me how labor-intensive relationships were. As I matured I understood the dynamics of people working together in team sports and eventually in interpersonal relationships.

My first crush was in elementary school. I recall my love for reading and admired a young man because he was an avid reader. Our feelings were mutual–puppy love. Our mothers thought a date to the movies would be a harmless outing for us.

Mind you, this was early 1962. Black people dressed up to “go out.” We wore our “Sunday best” and took the bus downtown to the movies. There wasn’t an officially labeled “colored only” section but the attendant sat us in a section by ourselves.

I don’t really remember the movie but I remember how controlling this fourth grade boy was! He was quite the conversationalist but only wanted to discuss topics he was interested in. When I suggested that we get two snacks to share, he decided that one snack would be sufficient. Alarms went off for me and I was suddenly disinterested and could not wait to get home. Needless to say, my love interest ended rather abruptly never to be mentioned again.

Later in high school, I met another young man who was also an avid reader and I admired him. After several chance meetings in the library, we began to spend causal time together. At first the interactions seemed effortless. After a while, the freedom and frivolity of our interaction dissipated. Control set in. You know the control that monitors how long it takes to go from one side of the quad to the library or how often you are seen speaking with a particular person. Or whether you are mature enough to read certain literature or pursue involvement in certain activities where there is no mutual interest.

I noted that it was becoming difficult to be friends. I began to spend fewer hours at the library, and renewed my acquaintances with classmates. Traits of self-centeredness and selfishness I observed on the date with my elementary crush reared their ugly heads.

The idea of being involved in a relationship was not on my radar screen. I realized in hindsight that I had dismissed the signs of control. Conflict seemed ongoing and never-ending. There is a unique difference between teasing out differences of opinions in discussions and dictating what another person should think and feel or fashioning another person into YOUR alter ego.

I am free spirited, independent, and out spoken. As a study partner or as a casual acquaintance, I expected no claims or demands in the relationship. Little did I know, in his mind, he had pegged me as his girl. When my free spirited nature aggravated the vice grip of control, the dynamics of the relationship grew somewhat tense.

I talked through a morass of misunderstood signals, feelings and intentions. It became insufferable to be a friend. Hurt feelings were barriers to conflict resolution. The faulty relational bridge of our mutual love of history and literature had been destroyed. There was no way we could continue as casual acquaintances.

Now as a married woman of several decades, I get it! Often people are in relationships where it is killing them to love you. For a variety of reasons, the relational bridge is out, intentions are not what they seemed and feelings are hurt.  Feelings of being trapped often keep the relationship from growing. Fabricated reasons for being together persist. Fear of hurting another’s feelings promotes lies, and the vice grip of control squashes the individuality of the other into submission or flight.

Too often the relational dynamics seem benign and do not involve toxic volatile intimate partner violence. Listening to what is said during benign exchanges of disagreement can provide insight. I remember hearing these words when I asked the young man to remove his hand from my knee. “I can’t wait until you are officially my girl. You won’t be telling me anything!”

I remember thinking, what did I say or do that made the young man feel he could put his hand on my knee? Why is he threatening to control me? The alarms went off in my head. As a child at the movies, the mothers had given the young man the money for the snacks. After our banter, I knew that possession meant control. However, I never viewed myself as anything to be owned, bartered for or controlled.

In retrospect, both relationships though very casual could have been extremely damaging to my psyche. Control is a poison in interpersonal relationships that hinders personal development and creativity.

Perhaps I am a bit of a pragmatist with a desire for clarity in the rules of engagement at the onset of a relationship. I needed dialogue long before passionate kisses. Understanding the hopes and dreams of a potential suitor were very important to me. I needed to know something about their family, siblings, and employment history long before I discussed the intentions of our relationship.

Once I got an idea of who the person says they were, the rules of engagement could be clearly stated and agreed upon and “the dance” could begin. When clarity and honesty are not part of the foundation, loving you begins to kill me.

President at The Marriage Doctor
Dr. Vivian M. Jackson passed from this life to glory on April 2, 2018. Dr. Jackson was the President of The Marriage Doctor, a marriage counseling ministry where she assisted couples in developing strategies they were willing to implement to build strong relationships. Married for 38 years and the mother of two adult children, Vivian practiced the craft of being married on the anvil of experience with Biblical principles as her guide. Affectionately known as Dr. Vivian, she spoke at conferences and hosted workshops around the nation. She was the First Lady of Hope Christian Church and the International Communion of Evangelical Churches.